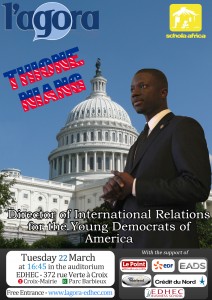 Thione Niang is the one who was at the heart of Barack Obama’s presidential campaign and current director of International Relations for the Young Democrats of America.

This conference will deal with :
– his career
– Obama’s presidential campaign and its Presidency
– the US politics
– the development of Africa
– migration, integration and diversity in the USA

On Tuesday 22nd, come to attend the first international conference of L’Agora which will be entirely in English.

Although he is only 31, Thione Niang’s already a symbol of multi cultural success. He was born in Médina Kaolack, in Senegal, the twelfth in a family of 28 children living in extreme poverty. In 2000, he left Senegal to go to New York.

Today, he is a political leader and consultant. Thione Niang is Director of International Relations for the Young Democrats of America. He created the Give One Project in Senegal, an association which fights to encourage young men and women to strive for greater social, economic and political participation in their communities.